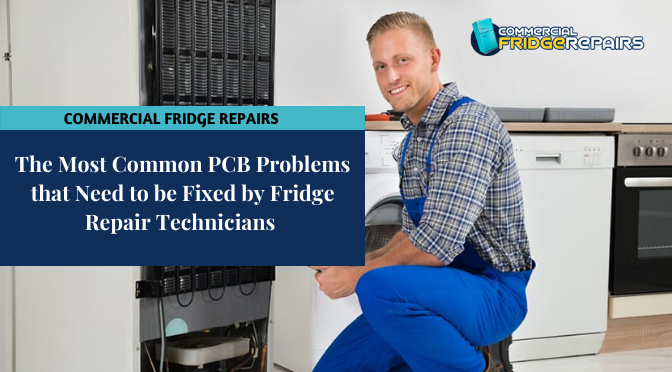 fridge repairs
The Most Common PCB Problems that Need to be Fixed by Fridge Repair Technicians
December 6, 2021 admin

There are a few spare parts of a refrigerator that go for a toss more frequently than some others. Naturally, they need more attention from the users. And when they go for a toss, it leads to malfunctioning of the device. PCB (Printed Circuit Board) is one of them. PCBs generally show certain symptoms or signs of damage and when that happens,  they need to be taken care of by professionals offering fridge repairs in and around Sydney, including Double Bay & other suburbs.

However, that’s a different issue. Here on this page, let us discuss the various issues that these PCBs are plagued with.

This is one of the most obvious issues that these PCBs face, when things come down to physical damage of the PCBs.  In fact, the most common reason behind PCB failures is disintegration of the internals. This can be caused by physical pressure or shock. Generally this happens as and when the device is carelessly handled during dissembling. That is the reason, when it comes to fixing fridges, all that you need to have the fridge repaired by the best in the industry, so that these types of issues can be averted.

Component failure of PCBs mainly pertains to damage – extensive or minor, of the circuit board. In fact, as per our experts, this is the most common reason behind PCB failure. When this happens there might not be any physical damage, but functional damage, which may cause the device to go numb and cause the refrigerator to malfunction or stop functioning to its best potential. Again, only skilled and qualified experts conducting fridge repairs in Ultimo can solve this issue with perfection.

Traces that are found on the circuit boards are conductive pathways, which are made up of copper or silver. If and when the trace suffers damage – whether or not visible to naked eye, it causes severe damage to the conductivity of the PCB as well as the components of the device. This causes the sudden shutdowns of the refrigerator, thus raising the need to summon techies from a reputed company

This is another extremely common issue that plagues PCBs and the ones in the refrigerator are no exception. The acute angles of the circuit board trap the acid that is generated during the etching process.  This acid accumulates in the nooks of the angles, which subsequently eats up more of the circuit surface than what is intended. This turns the circuit faulty, causing serious issues in the functionality of the refrigerator.

Now all these leads to one common bottom line – any issue regarding the PCB of the fridge has to be dealt with by qualified technicians. If you are in and around Sydney, Commercial Fridge Repairs is the best name to turn to. We are the home to the best techies, offering fridge repairs in Seven Hills and other Sydney suburbs.  Get a FREE QUOTE now if you are having issues with your fridge.