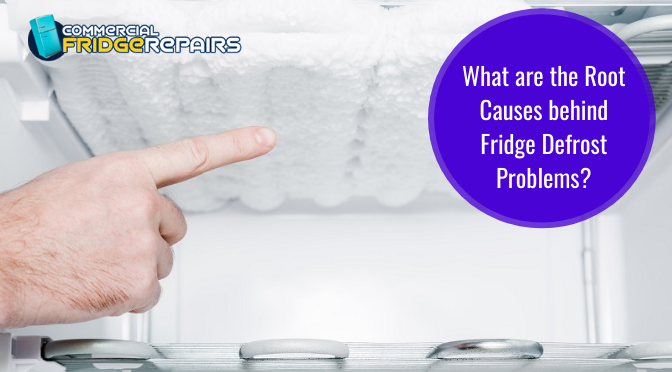 fridge repairs
What are the Root Causes behind Fridge Defrost Problems?
January 29, 2021 admin

A bad defrost system of a fridge is one of the most common issues that plague refrigerator users. One of the most common symptoms of a faulty defrost system is the complete and evenly frosted evaporator and cooling coil and the evaporator panel. Every fridge comes up with a unique refrigeration cycle as a part of its refrigerating mechanism. During that cycle, moisture in the air gets frozen and sticks to the evaporator and cooling coil as frost.

That is why refrigerators also have to go through a defrosting cycle periodically, to get rid of that frost. The cycles melt the ice and bring back the coils to normal conditions. So, if the refrigerator has any defrost problem, the frost that collects on the coil refuses to melt. It keeps on building on the coils and at one point in time, it starts blocking the airflow. When that happens, the refrigerator fails to cool anymore.

Now the question is, why does the fridge defrost system fail? There are 3 main reasons behind this phenomenon.

Modern frost-free refrigerators come up with a defrost system, which controls the cooling and defrosting cycle. The defrost system is made up of a defrost heater and a defrost timer. The function of a defrost timer is to switch the refrigerator between defrost and the cooling modes. Thus, if the timer is knocked out of order, it causes a buildup of excessive frost, which reduces the flow of air.  Or when the fridge stops at the defrost mode and all the frost melts, the fridge does not get back to the cooling cycle. Either way, it hampers the cooling seriously. It prompts the users to look for technicians who perform fridge repairs in Blacktown or elsewhere, depending upon their location.

The task of the defrost heater is to melt the frost that builds up over the evaporator coil. Naturally, when the heater develops any snag, it fails to melt the frost. As a result of this, frost again keeps on accumulating on the coil, restricting the flow of air. This again stops the fridge from causing effective cooling.

So you see, whether it’s a defective defrost timer or a defrost heater – the results are the same. Thus, it demands the intervention of an experienced technician who conducts fridge repair in Abbotsford or elsewhere.

If the refrigerator refuses to defrost, it might very well be a case of a defective thermostat. The defrost heater in a typical defrost system would turn on and off many times intermittently, to melt down the frost that develops on the evaporator coil. This defrost heater is connected with the defrost thermostat.

The function of the thermostat is to sense the temperature of the cooling coils. As and when the coils get too cold and frost-bitten, the thermostat would send a signal to the defrost heater, to start operating and melt the frost. If the thermostat develops a defect, it will fail to sense the temperature at all or will sense it wrongly, thereby giving false signals to the defrost heater. Again, it will put the entire refrigeration system out of the gears. Only a trained technician from a company like Commercial Fridge Repairs that carries out fridge repairs in Darlinghurst and other places such as Blacktown, Abbotsford, and so on, will be able to fix this intricate issue.

So you see, though the results are the same, the fridge defrost issues can take place due to these three different reasons. For further details, or to fix an appointment, call us at 0452 525 914.